Calm Before the Storm: How Weather Changes Can Create Fatigue 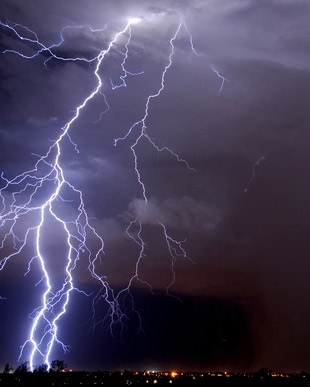 If so, you may want to consider some military intelligence that links bad weather with not only fatigue, but also apathy, nausea, headaches, dizziness, water retention, allergy outbreaks, irritation, anxiety, depression, and even suicide attempts.

What’s In The Air? Positive And Negative Ions

You may already have noticed that you seem to feel worse before a storm hits your area, and better after that storm has passed.

Specifically you could feel listless and so tired you can barely move or motivate yourself to move no matter what fatigue supplements you take once a storm is on its way.

That’s because the air is filled with positive ions before a storm hits and afterward, the negative ions predominate.

In fact, it’s not just people in the U.S. who notice these changes.

Unexplained fatigue becomes understandable when you realize that almost every country reports that a certain type of wind – one with hot, dry air – carries positive ions over the land it rushes over, leaving the inhabitants tired and feeling poorly.

Here’s a partial list of some of those different winds:

In fact, one author, Fred Soyka, was so convinced that the positive ions of the winds of the Swiss Alps were responsible for ill health, especially unexplained fatigue, that he wrote a book on it called, The Ion Effect.

The concept is nothing new to the Russians. They placed their Olympic athletes in environments high in negative ions back in the 1940s.

And why not? The athletes had ten times more endurance than in a normal air environment.

And that wasn’t all that they found. Imagine gymnasts who improved their balance and coordination skills by 300% and split second reaction time by100%.

Who could beat them with these superhuman scores?

The Russians had set up multiple negative ion generators wherever their athletes went to train.

The coaches made sure the negative ion generators were packed up with the athletic gear in the buses.

And when every cell was “high” on negative ions, fatigue was eliminated. And it was all legal.

This “high” on negative ions is not a bad thing like a high on drugs.

On the contrary, the high on natural negative ions is what happens when you go to the ocean and breathe in the amazingly fresh air. You feel great!

It’s the same as sitting beside a waterfall. The waterfall generates negative ions, and high levels are then breathed into the lungs, which diffuse into the body.

The skin also absorbs negative ions. There are specific ion channels for them to get into the body.

What Happens When Negative Ion Counts Are Low

Negative ion therapy has been reported in the medical literature for decades, especially in the area of asthma treatment. It helps asthmatics improve.

Many people are looking for reasons why asthmatics may suddenly go from being okay to having an asthmatic attack. The attack zaps their breath and causes a lot more than fatigue.

What scientists found was that it was important to consider the negative ion theory.

When positive ions are high in the air, it’s more probable that asthmatics will have attacks.

It’s also probable that those people who have violent outbursts will have them when the positive ions are high.

Animals can also become more aggressive when the positive ions are high and the negative ion count is low.

The U.S. military discovered that if a negative ions generator or ionizer is used in the cockpit, pilots won’t suffer from fatigue. And like the Russians, their reaction time will improve.

Some people have gone to the point of adding more negative ions to the water they drink.

In this negative ion therapy, the concept is the same: if you favor the negative ions in your water over positive ions, you will have health.

Since water is the solute that the whole body is made of and just about everything in the body dissolves in water, ionizing it can bring about an increase in health and thus energy levels.

Try Negative Ion Treatment For Yourself

You can do a simple negative ion therapy treatment session and see what happens to your fatigue. This is recommended, especially if you have unexplained fatigue.

Borrow a negative ion generator or ionizer from a friend and use it every day for a week. See what happens to your fatigue.

If positive ions are affecting you and causing your unexplainable fatigue, the negative ion therapy will lessen your fatigue.

You could also simultaneously drink water that has been ionized, but remember that the body is made of up to 75% water, which takes a lot of new ionized water to hydrate it properly.

It’s easier to just breathe in the negative ions. And banish unexplained fatigue for good.

Previous post: 5 Reasons Why Your Child Could be Tired