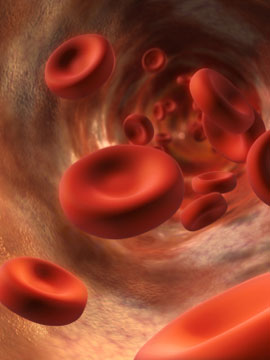 If you’ve ever wondered whether anemia and fatigue (or tiredness) are related, the answer is a big YES.

You could have anemia for months and not ever realize that you had it until you go to the doctor for a check-up.

A simple red blood cell count test will discover anemia and only requires a blood sample.

Did you know that anemia can also lead to heart disease and a coma? It can.

So anemia is no simple matter that can be ignored. If left untreated, you can die from a low quality and quantity of blood.

What Is Anemia Anyway?

• Loss of excessive amounts of blood during menstruation

• Lack of intake of food and calories and thus, multiple deficiencies

The parasitic infections cause anemia because parasites can be pretty aggressive and chew through tissues in the body, causing internal hemorrhaging.

Peptic ulcers are open wounds in the lining of the stomach, and bleeding is involved.

Other symptoms of anemia

All anemias cause similar symptoms, and the most common symptom is tiredness and fatigue. Anemia and fatigue go together hand in glove.

This anemia fatigue is not just the type of tiredness that results after a hard day of work.

It’s the kind of fatigue that makes it almost impossible to get out of bed in the morning to go to work.

Anemia can also cause these symptoms:

• Dull mental functioning (as if you have brain fog)

Fatigue Is Not Only Caused By Anemia

It’s important to realize that fatigue can be caused by anemia but it can also be caused by other things that are wrong with the body.

Here’s a short list of some of those things:

• Infection anywhere in the body

• Pain in the body

This is why it’s so important to get to a doctor to have your unexplained fatigue analyzed and the root of it uncovered.

If your white blood cell count is elevated, it can mean that you have an infection. Infections cause tiredness although they may not be accompanied by anemia and fatigue.

Low white blood cell count can also be related to anemia and fatigue, especially if an individual has not been eating a proper diet.

When anemia is the cause of unexplained fatigue, the reason why there is fatigue in the first place is that the red blood cells carry oxygen to every part of your body.

Without enough cells carrying the oxygen, you will be tired. If the cells don’t get what they need, they cry out for the oxygen and tiredness results. You get slowed down, no matter what you are doing.

Yet, the simple solution can be a blood transfusion if the red blood cell count is exceptionally low, lower than 8 mg/dl when the normal is 12-16 mg/dl. As soon as the IV starts bringing in new blood, the fatigue lifts.

When the red blood cell level is greater than 8, a doctor will send you home to start eating high iron foods, such as liver, spinach, beef, lamb, bison, buffalo, leafy greens like spinach, and different kinds of legumes such as black-eyed peas. Blackstrap molasses is also a good source of iron.

He may also give you an iron supplement that should be taken for three months. It takes a full three months to build new blood cells, which will then eliminate the anemia and fatigue.

Imagine what it will be like to have your tiredness gone! It’s like a breath of fresh air inside your arteries!

For more on tiredness, check out the ebook, End Tiredness Program.

It contains quite a bit of background information that can help you get down to the root of your tiredness.

Are You Tired Or Are You Bored?
Why Caffeine Doesn't Work To Decrease Tiredness
Mountain Herb For Mental And Physical Fatigue

Next post: Are Food Allergies Related To Chronic Fatigue?

Previous post: Calm Before the Storm: How Weather Changes Can Create Fatigue